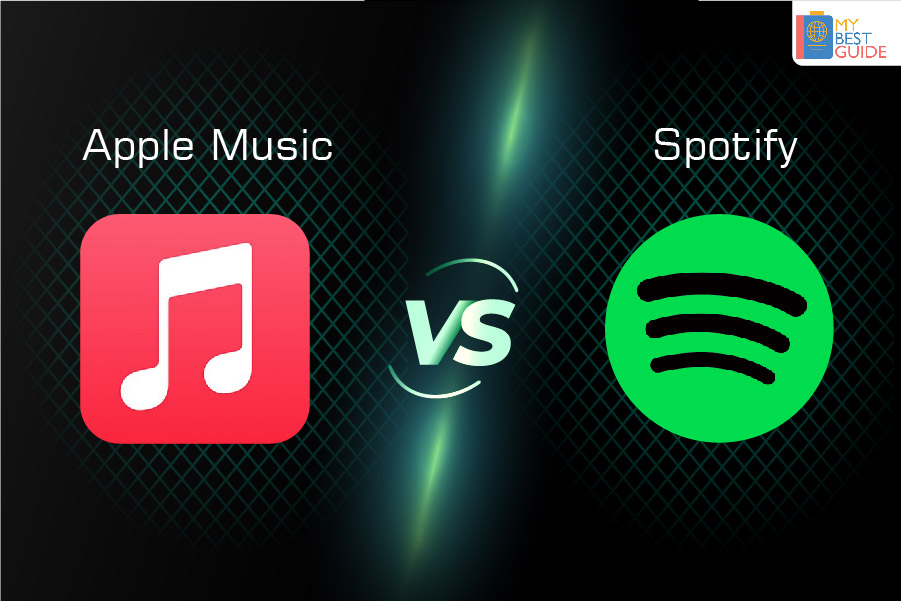 Spotify was the one app to lay down the blueprint which helped in setting up the music streaming industry. This can be seen through the millions of paying subscribers, which is far more than any of the competition out there, not to mention the millions of free users as well. The company saw the best growth in its history recently when it added over 11 million paid subscribers in the last quarter of the year 2019, taking the total subscriber count to 1.2 billion globally. On the other hand, Apple Music, even being a newcomer, is no less. Known for a humongous library of music, high profile releases, and an excellent radio system, Apple Music surpassed Spotify subscriber count in the United States with 60 million premium subscribers. So here we bring to you, the most awaited comparison of two of the best music streaming apps – Apple Music vs Spotify.

Spotify was founded by Daniel Ek and Martin Lorentzon in Stockholm, Sweden. The duo started the platform in 2006 to deal with the problem of piracy faced by the music industry all over the world. They launched the said music platform two years later and were hopeful that the Company would be tens of billions in a few years’ time.

Spotify’s main competitor Apple Music was launched in 2015 and secured exclusive deals with famous artists like Drake, Frank Ocean, etc to stream their music first. Earlier, Apple had the iTunes store where users had to pay a certain amount of money per song to download them. But the difference between Apple Music and iTunes was that the former allowed the user to download unlimited songs for a nominal paid periodically.

This is one heading under which neither Spotify Music nor Apple Music can take the lead. This makes it hard to choose the best app between Apple Music and Spotify. Unless the user is extremely specific about the details of the streaming quality, he/she/they won’t be able to spot any major differences in the stream quality. Spotify streams using the Ogg Vorbis format. It provides different streaming bit rates for mobile and desktop.

On mobile, its users can choose their preferred bit rate with the upper limit being 320 kbps. This flexible format proves to be very useful for users who are conscious about their internet usage rate etc. On Desktop, premium users can stream at 320 kbps but free users only have the option of streaming at 160 kbps. Since Apple Music also provides for almost the same streaming quality, it’s a tie between the two applications under this heading. Additionally, both these applications provide their users with the option of changing the equalizer according to their preferences, again.

Both the applications have the most aesthetic designs and appearances which makes this section of Apple Music vs Spotify very competitive. Apple’s redesigned appearance places more emphasis on the picture of the album and makes the text easy to read. Spotify has remained consistent over the years with its Black and Neon Green Interface.

Both the applications are extremely user-friendly and allow them to navigate through the options easily. Therefore, it’s a clear tie between the apps when the comparison is based on the interface.

However, coming to social media, Spotify gets the upper hand. Apple Music has also tried to step up its game in iOS 11 by allowing users to add their friends on the app and have their profiles appear beside their currently streaming music. It allows the users to share playlists and notify users of songs their friends are listening to. If a user likes a particular artist on Apple Music, it will give updates regarding the same to the user. However, this is no match to Spotify’s social integration. This is because Spotify allows its users to share the music they stream with their friends through Instagram and Facebook. It also allows them to share the music through direct links to the songs.

Any Music Listener’s biggest concerns would definitely include the music collection available on each application. This is one of the basic sections to decide the best app between Apple Music and Spotify. Apple boasts of having 60 million tracks whereas Spotify claims to have more than 50 million tracks. Thus, Apple leads this segment in the battle of Apple Music vs Spotify.

Initially, when Spotify was introduced in India, it was unable to get on board the music belonging to Warner Brothers due to some legal issues. We might expect a rise in the numbers once the issues are dealt with.

Apart from that, most local and newer artists tend to upload their music on Spotify as compared to Apple Music. Apple Music, on the other hand, takes into account all the music files saved on the user’s device. Therefore, Apple Music definitely takes the lead when it comes to music availability.

However, this doesn’t seem to be the case with Podcasts. This is because Podcasts are available for free of cost to all the Spotify. Apple Music users have to pay extra and download an additional app to listen to any of the podcasts.

Discovering new music is one of the primary reasons to use a streaming service. Spotify and Apple Music provide suggestions based on your existing music taste. From a peripheral analysis, it is hard to decide the best app between Apple Music and Spotify.

While Spotify uses Discover Weekly and Release Radar to introduce the users to new tracks, Apple Music uses New Mix for the same purpose. Both the streaming services have radio stations based on favorite artists and tracks. Apple Music has a DJ hosted radio station called Beats1 Radio which a user can listen to in real-time like any other traditional radio station. Based on user suggestions, it can be said that Spotify’s recommendation of new music is more accurate, all credits to its algorithm based on the user’s listening habit. Apple tries to cover up the flaws by uncovering new or unreleased tracks on its radio station.

Choosing the best app among Apple Music and Spotify would be impossible without this section. Apple Music and Spotify Music both approximately charge the same amount for a premium account i.e., at Rs. 120 and Rs. 129 per month respectively, but there are certainly other points which the users need to keep in mind while choosing their music streaming application, apart from the student discount and three months free trial provided by each party. To understand which is the best app, Apple Music or Spotify, we need to keep the following details in mind.

While Spotify clearly proves to be a cheaper option, it also gives all its users free, ad-supported tier, Apple on the other hand only allows its free users to access the Beats1 Radio. This is primarily the reason for Spotify’s larger base.

Summing up the Apple Music vs Spotify Debate

The Verdict of the Apple Music vs Spotify Debate

If any user doesn’t want to invest any amount of money and doesn’t mind interruptions while streaming music, then Spotify is definitely the go-to application. This is because it provides almost all its services to the users streaming for free. Apple Music on the other hand hardly provides anything to the users for free. The problem of choice arises when the user is ready to invest his/her/their money into the streaming applications. Spotify Music and Apple Music are both available at almost the same price. While Spotify has lesser music, smooth compatibility and podcasts to listen to, Apple Music provides a much larger collection of music and smooth compatibility with Apple devices. Therefore, it is advisable for users to go for a Spotify Music Premium Account unless they already own a perfect setup of Apple devices.

FAQs Regarding Apple Music vs Spotify

What are the streaming qualities of Apple Music and Spotify?

What are the number of songs each of the apps have?

What are the different subscription packages available in both the apps?

According to research undertaken by Technavio, the music streaming service market is going to grow by 10.01bn USD in 2019-2023. These numbers were hiked by around 35% as a result of the COVID-19 outbreak. This includes around 20% increase in the monthly users and all of them choosing the premium option to have a more seamless experience with their music streaming.

While Spotify has grown in Asia and Latin America, Apple Music has expanded its market to 52 newer countries and provided them with a 6 months free trial period. This increase in numbers was caused due to most people staying home as a result of the COVID-19 pandemic. However, there was a shift in the interests of the people from simply music to radio, and podcasts about lifestyle, wellbeing, etc.

The race of subscribers and subscriptions is still heating on and it is interesting to see how the end result will turn out to be given the pandemic doesn’t seem to end any time soon.