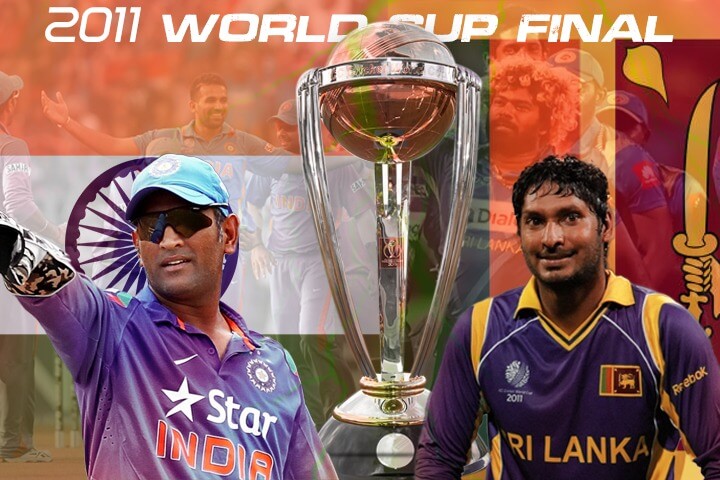 On 2nd April 2011, history was created when India won the 2011 World Cup Final. The final was between India Vs Sri Lanka, at the Wankhade Stadium in Mumbai. The world cup final match had a fully packed stadium with around 33000 spectators. To date, the Adrenaline rush when you watch the Ind Vs Sl World Cup 2011 highlights is unimaginable. But what had exactly happened that day? How did people react to winning the 2011 Cricket World Cup? How did both the teams reach the top of the 2011 World Cup Scoreboard?

Cricket is an emotion in a country like India, people celebrate it as a festival. And more than just hosting the 2011 Cricket World Cup was more significant because of Sachin Tendulkar. The God of cricket as people refer him was playing for the final time in this World Cup final match. And the team and India wanted to win it for him. For all that he had given to this sport from playing at a very young age of 16. It was a chance to lift the World Cup after 28long years of waiting for the master blaster Sachin Tendulkar himself.

The journey of the teams to the World Cup final

Both the teams qualified for the Quarters at the second position of both the groups. India had lost one game, tied one game, and won four games. On the other hand, Sri Lanka also won four matches, lost one and one match of theirs did not have any result.

It was the first time when two Asian countries, were against each other in a World Cup final.

Toss decides who bats or bowls first and the finals made it more crucial. The crowd cheering loudly for the India Sri Lanka finals and waiting for the game to start. And there comes a twist the World Cup final toss, MS Dhoni tosses the coin and Sangakkara calls. And here comes the world cup energy and pressure, both the captains thought they had won the Cricket World Cup final toss. But the umpire could not here Sangakkara’s call and thus the toss was done again.

And in the second toss, Sangakkara calls again and this time they win the toss and decide to set the 2011 World Cup Scoreboard for the hosts. And this double toss situation does not happen every day. It is one of those things that people still think and smile about.

Everyone hooked to their seats started watching the World Cup final. And there we see Zaheer Khan approaching the Sri Lankan batsman with his deadly bowling speed. And with this, the official match had begun. Every Indian prayed for a wicket and every Sri Lankan fan prayed for their batsman doing good.

The Sri Lankan team had a good start to the World Cup Final match. They were hitting the ball to the boundaries but Zaheer Khan did not let that happen for too long. For, some time the Sri Lankan team was unstable. But they soon returned to building partnerships. The 2011 World Cup Scoreboard rising slowly but steadily towards a decent total. And the pressure of taking wickets also increasing with every ball bowled.

And then came in Jayawardene to bat, India was in a decent position before that. India’s Sri Lanka final did not look the same anymore. Jayawardene hits a smashing century and remained not out the entire innings. And lead the scoreboard of a 274. That meant India had to now score 275 runs, which is a lot under the World Cup final pressure to win the trophy.

The God of cricket along with his partner Sehwag enters the crease, and Sehwag takes the strike. And on the second ball itself, he gets out. The entire nation goes into a shock and even when you watch the World Cup 2011 highlights today, it hurts just the same. Then comes in Gambhir, who starts building the partnership again.

But this time, Sachin Tendulkar had to depart. The entire stadium and the country are silent, this is what no one wanted to happen. And as Virat Kohli now recalls saying that was one of his entries that he would always remember. And then tries to build a partnership with Gautam Gambhir, and departs after doing a decent job for the team. But the team is still in a position where they can still lose the World Cup.

And then steps in the Captain Cool, who changes the batting order and comes before Yuvraj Singh. And this is becoming the turning point of the match. Gambhir and Dhoni bat along each other and hit fours and sixes to help India remain in the game. But unfortunately just before Gambhir could complete his century he gets bowled.

Now, comes in Yuvraj Singh. Who batted along with Dhoni and led India to its victory, with 11 balls to spare. And the winning shot is hit by Dhoni out of the boundary and the celebration had just begun.

Here you can check the entire 2011 World Cup Scoreboard for the finals. And do not forget to check out the World Cup 2011 highlights to relive those moments.

The team was happy excited because you don’t be a part of the World Cup-winning team every day. But so was the excitement of the Indian people. The celebrations for them too had just begun. But that one line that Ravi Shastri spoke sitting in the commentary room just keeps on echoing in our ears. It says ” Dhoni finishes off in style. India wins the World Cup after 28 long years”, started the real celebration for the Indian crowd.

Winning a World Cup on your home ground is a dream come true for the players. And we still cannot forget the frame where Yuvraj Singh hugs MS Dhoni and the smile and joy on their faces is irreplaceable. Soon, the team runs and joins them in the celebration where there are laughter, smiles, and tears of joy.

Well, but on the other hand, you cannot ignore the Sri Lankan faces, who had tears too for not winning the 2011 World Cup final. But that is how it is someone who has to lose for someone to win.

Then started the most amazing celebration of the 2011 Cricket World Cup. When Sachin Tendulkar sat on the shoulders of his teammates with the Indian Flag in his hands going around the stadium. Thanking everyone for their support and sharing this moment of happiness with the entire nation.

Being an Indian, we celebrate the littlest of happiness. So, how could we miss celebrating such an important event? Everyone saw this match on big screens, sitting together as one and not missing a single ball. And as soon as India won, there were firecrackers all around the sky. People started dancing, playing drums, songs just as if that day was a Deepawali.

People came out on roads to witness this great win. It was one of the nights where the entire nation did not sleep and shared this moment of pride and happiness.

Finally, the Indian Captain lifted the World Cup Trophy and handed it over to the entire squad. Teammates were seen kissing the trophy. They were carrying it just like a child when he/she receives an award. There were Indian Flags all around and the crowd also cheering as if they had won the trophy. And MS Dhoni became the first Indian captain to win all the three ICC Tournaments. The Indian team, was finally the champion as they posed for pictures and opened champagne bottles to celebrate.

No, India was not the only country to host the ICC Cricket World Cup 2011. It was co-hosted among three Asian nations. India, Sri Lanka, and Bangladesh. All the match venues were divided among them. Whereas India was the host to the India Sri Lanka Finals on the 2nd April 2011.

Was the 2011 World Cup final really fixed? As it is claimed to be.

No, the World Cup final was not fixed as claimed by the ex-sports minister of Sri Lanka. All the Sri Lankan players gave there best on the match day.
Moreover, the ICC has given the India Sri Lanka finals a clear chit this years, by saying they were no solid evidence against the same. These were speculations that are being created around.

Was Yuvraj Singh suffering from cancer during World Cup?

There is no confirmed answer to this. The only confirmed answer that we have is that he knew he had a deadly tumor inside his body that could also take his life. He not only just played, but also won the man of the series award for his excellent performance throughout the tournament.
But we don’t have any answer about did he knew that the tumor was cancerous or not.

Who won the award for most wickets and runs?

Zaheer Khan the former Indian fast bowler and a Pakistani bowler Shahid Afridi shared the award of most wickets. That was 21 for each of the bowlers.
The maximum runs award went to a Sri Lankan player Tillakaratne Dilshan for scoring a total of 500 runs in the entire tournament.