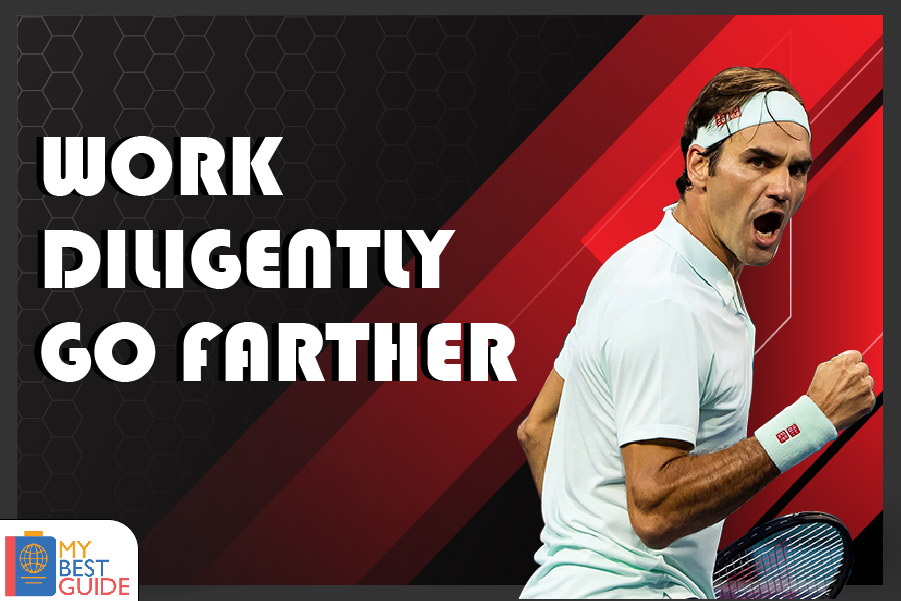 Federer is a professional tennis player from Switzerland. And is one of the most successful players in the world of Tennis. Roger Federer holds the record of most number of Grand Slams any player has ever won in Men’s Single category. And currently as of September 2020 holds rank 4 in the world. The Net Worth of Roger Federer is amongst the highest of any tennis athlete and has a Family of 5. The Age of Roger Federer is 39 years old, but still has plans of continuing playing. And as he says, he makes a decision every year. And has not made any of those till now.

The youth of Roger Federer

Roger Federer had a very simple youth as of other normal kids. He was born on 8th August 1981, in Basel Switzerland. And also served in the military of Switzerland for a few years. As it is an obligation for every youth to be a part of. But in 2003, he was declared unsuitable for the military, and his services were no longer required.

Roger Federer’s mother belonged to South Africa, thus he had the citizenship of both the countries. Though he had been fulfilling his military services till 2003. At the Age of 12 years, Roger Federer started playing tennis as a junior. But won his first junior Wimbledon in 1998 at the age of 17 years. And from there the journey of Roger Federer winning Grand Slams began.

The career of Federer began when he first time made to finals of the Marseille Open in 2000, where he lost. But Federer made it to the quarter-finals of his first grand slam in 2001, where he lost to then world No.2. And further, in the same year, he faced, the four-time defending champion, in the Wimbledon. Where he defeated world number 1, in a five-set match. At the Age of 19, Roger Federer played the quarter-finals again and lost to world number 2. But making his space to the top 15 tennis players at that time.

But who knew that one day this man Roger Federer will be creating history by winning 20 Grand Slams.

The First Grand Slam and Success

In the year 2003, after a successful beginning to his career Federer won his first Grand Slam singles title in Wimbledon Championship. He won the finals from Mark Philippoussis. Though he had to become the number 1 in the world, but could not for this season. Due to an injury to another player.

But, he kept his dominance throughout. His success kept on increasing. And so did the Net Worth of Roger Federer kept on increasing. In the continuing year (2004), he created his dominance. Roger Federer won three Grand Slams this year. And also became the world number 1 for the first time, after his win in Australian Opens against Marat Safin. Leading to this, he won his second Wimbledon and his first US Open. And he was the player that no one could stop.

What kept him so grounded to attain further success in his career was his devotion to the sport. And the Family support Roger Federer had.

Though, in 2005 Federer did not have a dream start to this season. He lost the first two Grand Slams, but made it to the finals. But soon he was back on track winning yet another Wimbledon for himself, and then proved his skill by winning the second US Open for himself.

The following season 2006 was the best year of his career according to stats. What was so phenomenal about this season was, that he won 12 singles titles this season. And has the best ratio of match winnings to loss 92:5. Which is the highest that any player got. Another number that proves that it was his career is that he played 16 finals out of the 17 finals in which he had given his appearance. And again finished as number 1 in this season.

The most favorite rivalry on the field of tennis met again Rafael Nadal Vs Roger Federer. And Federer defeated him again winning himself another Grand Slam. His skill in the field was never a problem. But as the Age of Roger Federer increased, so did his difficulty in maintaing his physical health.

He kept on winning titles for himself. But also faced a lot of issues with his injuries and illness. The first major break he had was for about 6 months in 2008. Because he was suffering from a disease mononucleosis. It makes a person very weak, with fever and swollen neck. But came back and won an olympic gold as well as the US Open.

He also broke many records and was consecutively 5 times ranked 1, and then second and third in the following seasons. But, he was wanted to be back on the top. And made a return to his top position in 2012, where he again won the Wimbledon. And accomplished himself as World Number 1. But, after this, his ranks kept on falling and his injuries too.

In 2016, due to his knee injury. It was the first time in 14 years that he dropped out of the Olympics. And lost his position from the top 10 in the world. And the world started criticising him.

But he proved everyone wrong in 2017. He had the second-best season of his career. Where he defeated Rafael Nadal to win the Australian Open. Being the oldest man to reach, compete, and win the finals. And further winning the Wimbledon Titles too. One thing, that you should learn from Federer is his perseverance, honesty, and loyalty towards his sport. And his hunger for never being satisfied even after being the best in the world.

The last few seasons have been all about the records that Roger Federer made. In 2018, Roger Federer won his 20th Grand Slam Title creating a world record. But this was after a decade that Federer was able to defend a major title at the US Open. And also broke the ATP record for the longest span between a player’s first and last weeks to attain the No. 1 ranking at 14 years and 17 days apart, as well as the most time between two successive reigns at No. 1 at 5 years and 106 days.

Similarly in 2019, Roger Federer started the season with breaking the Hopman Cup World Record. Becoming the only player to win mix-gender events thrice. And as he continued in the Miami Open he won his 100th Open Title. And after a long break at the Clay-court of three years. He won his 1200th win in the Madrid Open. And finally he gave his appearance in the Wimbledon Final for the 12th time but lost the final against Novak Djokovic. Though he won the semi-final against his biggest rival Nadal, whom he faces last in 2008. And made to the spot of Finals.

2020 has been a rough time for Federer. This is the second season in his entire career, in which Roger Federer returns home without winning a single title. He had started the year with the Australian Open but lost the semi-final to Djokovic, who is now his rival on the court. But due to a knee injury, he took time off and backed out from various tournaments. And due to an initial setback from rehabilitation, in June he announced he’ll be taking off for the time till he recovers. But has promised to return back to court in 2021.

Roger Federer has a happy and blessed Family of five. He has two pairs of twins, whom his wife gave birth to. His Wife is also a former Tennis Player. The two met in 2000, where they were competing in the Sydney Olympics. Though his Wife quit playing due to a foot injury. Roger Federer and his wife Miroslava Federer (Mirka) got married in Basel on 11 April 2009.

At the Age of 28, Roger Federer became the father of identical daughters, and again in 2014 with identical twin boys. He had all his kids with his wife Mirka. And has been married to her for 11 years and counting. And the Family of Roger Federer has been his support throughout his life and has seen him play live whenever possible, and love cheering him from the stands.

Net Worth of Roger Federer

The Net Worth of Roger Federer is approximately $106.3 million according to Forbes. It also tops the ranks as the World’s Highest-Paid Athlete and is at number 3 at Top 100 celebrities. He earns most of his earning that is about $100 Million from endorsements.

He does endorsements for Swiss Brands. And is also one of the oldest brand ambassador of Rolex. Other than this he endorses brands of his sports as well. And a car-giant company Mercedez-Benz. Some other of his endorsements are with brands like Gillette and Rimowa. Also one of his latest deals is with Nike, a sports brand. And his logo with Nike came out in the month of March 2020.

Life Outside the Court

As the Net Worth of Roger Federer kept on rising. And he started to see the real world. He started to invest in the society as well. For their well being and prosperity. This is why he founded his charity foundations.

He works towards the welfare of 1 million children in Africa. Who are underprivileged and have no other source of surviving the hardships of life. He had accumulated $50 Million to establish these foundations of his. The names of his foundations are Elton John AIDS Foundation, Humpty Dumpty Foundation, Make-A-Wish Foundation, Mines Advisory Group, Roger Federer Foundation, and Small Steps Project.

Read more about best players from other sports, like MS Dhoni and his journey with cricket.

FAQs Regarding Career of Roger Federer

Who has the on field rivalry with Roger Federer?

There are two major rivalries of Roger Federer because all of them are considered to be legendary players. The first rivalry is shared with Rafael Nadal and him. They have played for a total of 40 times, but Federer trails with 16-24. Though on hard court Federer leads with 11-9.
Another rivalry is with Novak Djokovic, in which he agains trails by 23-27 out of the total 50 matches they have played against each other. And the rivalry is because he the only player after Nadal who has defeated Federer in consective Grand Slam tournaments.

What are the Statistics of Roger Federer’s Grand Slam career so far?

What is the playing style of Roger Federer?

Federer’s natural play style is Attacking. And it is complemented by the fabulous footwork that he does. His brain is computerized to judge exactly the speed of the ball, it’s landing position, and taking in the account of spin factor. He hits some beautiful shots, with being best in back-hand flip. And is a shot maker, who has added a lot of variety in the drop shots.

Tennis as a sport has suffered due to this pandemic just like every other sport. Players could not get to play matches. But now, they have resumed. Starting from the French Open, many other tournaments have been planned ahead by keeping all of the safety measures in mind. But, if we talk about Roger Federer. At the Age of 39 Roger Federer suffered from a knee injury in the beginning of the year, and thus will take a longer time to recover. And we are not going to see him play this year, but for sure he will be back next year. And put his best foot forward on the court.