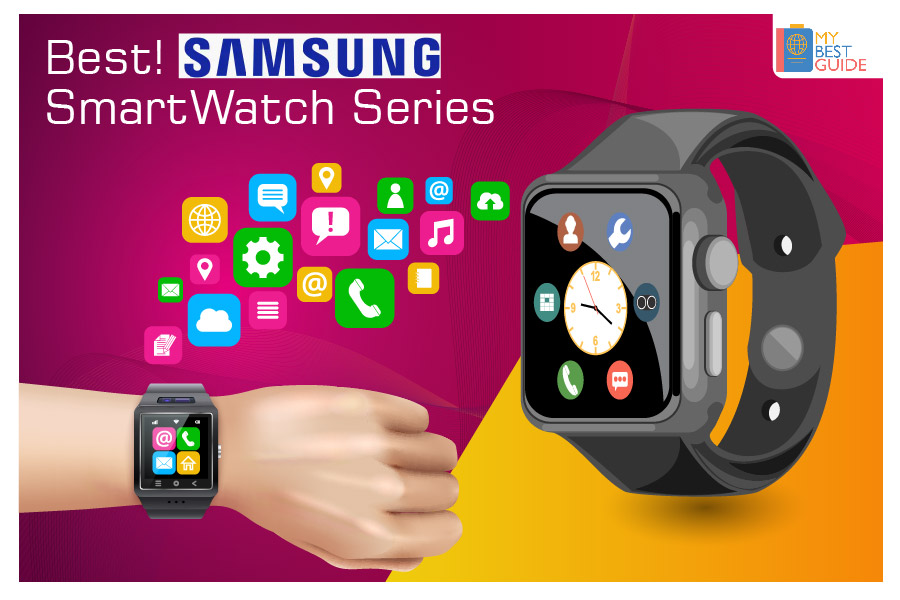 In today’s world, technology is the main criterion in which the whole world is keen to achieve success. In that category, the SmartWatch is one of the devices that has overcome the faults of many other devices such as smartphones, laptops, etc. We shall now learn about Samsung Galaxy Smart Watch price, Features, benefits, etc from Samsung smartwatch.

It was announced on 5 August 2020. It comes in 2 variants which are 45mm as well as 41mm. The 45mm variant has a Super AMOLED corning Gorilla glass 1.4-inch display and a 340 mAh battery whereas the 41mm has a display of 1.2-inch and a 247 mAh battery. Further, Some of the common features are Blood pressure measuring features, Accelerometer, gyroscope, heart rate, barometer, Natural language command, and dictator. The space provided is 8 GB and a ram of 1 GB.

It was released in April 2019. It has a 1.1 inches Super AMOLED corning gorilla glass display. Moreover, it has a 768 MB Ram as well as 4 GB storage. Further, It has a 230 mAh battery with a Tizen-based wearable OS 4.0 operating system. Some of the features of the Samsung Galaxy Active are Accelerometer, gyro, heart rate, barometer, natural language commands, dictation, etc. It also does support wireless charging. Some of the drawbacks are It does not have a Sim Card slot as well as a memory card slot also it does not have an earphone jack.

This is one of the latest smartwatches of Samsung. It has features like the rest of the Samsung galaxy watches. those are Heart rate, calorie count, distance traveled, pedometer, sleep quantity, and Bluetooth and Calendar Reminder. Some of the sensors are Gyrometre, Accelerometer, etc.

This is one of the latest smartwatches of Samsung. Meanwhile, It has features like the rest of the Samsung galaxy watches. Those are Heart rate, calorie count, distance traveled, pedometer, sleep quantity, and Bluetooth and Calendar Reminder. Some of the sensors are Gyrometre, Accelerometer, etc. It is made up of Silicon also has a Touch AMOLED display with 126 x 294 pixels. The battery lasts up to 15 days. it also has a water resistance feature.

This was launched in September 2013. It has a 1.63 Inches Super AMOLED display. Moreover, it has a Tizen-based wearable platform operating system. Further, it has 4GB storage as well as 512MB RAM. It has features like Accelerometer, gyro, etc. Moreover, it has Li-Ion 315 mAh, non-removable battery.

This is released in May 2014. It has a 1.63 inches Super AMOLED display. Moreover, it consists of Exynos 3250 Dual chipset with Dual-core 1.0 GHz Cortex-A7 CPU. This has 4GB internal storage as well as 512MB RAM. it further has a Tizen-based wearable platform operating system. Some of the features are Accelerometer, gyro, heart rate, etc. The battery provided is Li-Ion 300 mAh, a non-removable battery with Up to 72 h standby.

The Samsung galaxy gear sport has a super AMOLED round-shaped 30mm display size. It is compact with both android as well as iOS operating systems. The operating system available is Tizen as well as 4 GB of space. The strap comes in blue color. Some of the features are For example Accelerometer, Barometer, Gyro Sensor, Hr Sensor, Light Sensor, etc. Moreover, It is water-resistant with a 50m water resistance depth. Both men and women can use it. The battery is rechargeable with 5 days standby.

One of the most beneficial features for which people use the Samsung smartwatch is tracking their daily fitness. Some of them are Counting the calories burn, alarm clock, Pedometer which is beneficial in counting the step, Moreover, Heart rate, as well as sleep quantity as well as hours slept. These features are very beneficial for the person who is fond of good health.

This feature is very beneficial for the businessman as well as students or someone who is a frequent user of smartphones. The Samsung Galaxy Smartwatch after connecting to the smartphone gets enabled to access your call information as well as mail, messages, Contacts, callers information, missed calls. Moreover, social networking applications like Facebook, Twitter, etc.

The Samsung smartwatch is very beneficial in finding the location by use of GPS or apple or google map. It will locate your destination be the help of google map and make your path easier. not only this but also it will help you to find your lost electronic objects like Mobile Phones.

There are various types of additional features which is available in the Samsung Galaxy smartwatch. These are beneficial in some or the other way like it has Super AMOLED Corning Gorilla Glass which provides additional protection as well as a classy look Moreover, It supports 4G network connectivity, as well as It, also has some kind of space as well as ram which helps in saving some kind of information as well as songs and other features. Moreover, It also has a camera where we can click our picture too and in some of the models, as well as the video call feature is too available. Not the only pic but also there are some of the Samsung galaxy smartwatches which do take screenshots.

No, The Samsung Smartwatch does not need any kind of pack as it uses the e-sim and uses the pack as well as information from the smartphone.

Yes, In fact, most people use the Samsung smartwatch for getting health-related help like Blood pressure, Distance walked, Calories burned, Calorie intake. Moreover, Distance traveled, activity performed, not only this but also it monitors sleep, etc.

Not all but the smartwatch which do offer google assistance can support voice recording.

5. Do samsung smartwatch support LTE Network on there own ?

Yes, most of the Samsung smartwatch-like Samsung galaxy watch active does support the LTE network on its own.