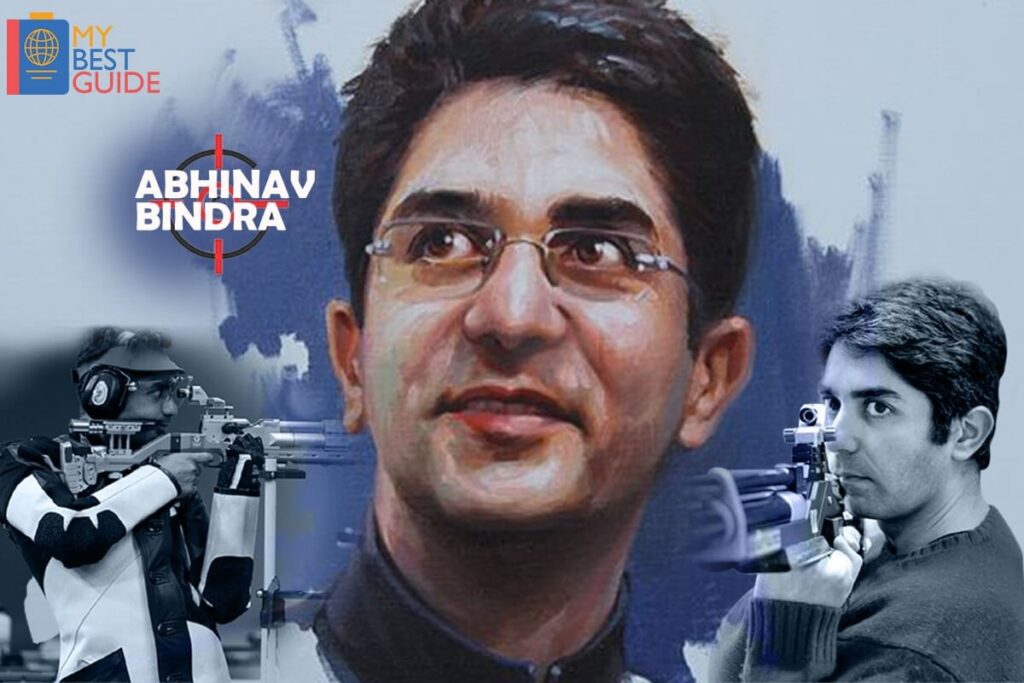 Who is Abhinav Bindra? Well, Abhinav Bindra is a retired Shooting professional from India who became a businessman. And became India’s only individual Gold medalist in Olympics which came in the year 2008 for 10-meter rifle shooting. Other than this, Abhinav Bindra has received multiple honorary Awards and some of his awards have been in the form of being brand ambassadors for various different events. He was the goodwill ambassador for the 2016 Rio Olympics after his retirement from his shooting career. Though he has retired he still believes in the game and is passionate about the same, which leads him to work towards the sports and help India reach its potential in shooting. And Abhinav Bindra has still not been able to find the love of his life except shooting and does not have a wife.

Life as a Boy

Bindra was born in a Punjabi family in the mountains of Himachal Pradesh in Dehradun, on the 28th of September 1982. Which makes him a 38-year-old gentleman today. For the first two years, he studied in Dehradun itself. But afterward, he shifted to Chandigarh and completed his school education at St. Stephens, Chandigarh. And finally completed his graduation from the University Of Colorado. His parents were very passionate for him to grow his career as a sports player. And seeing his interest in shooting, they also built him an indoor shooting range for his training.

Because Bindra took upon shooting at a very early age in his life, he started playing professionally from a very young age. All these years of practice had rewarded Abhinav Bindra with a lot of awards, bringing pride to his nation. And it’s the result of all the hard work he has done over the years. He started playing in 1998 and ended his career in 2016 after giving it 18 years of his life.

Abhinav Bindra at the age of 15, for the first time, represented India in the 1998 Commonwealth Games. Where he was the youngest Indian to ever participate in a global tournament. Though he was not at the top of the table, it was still a huge achievement for India. Again at the age of 17, Abhinav Bindra for the first time participated in the 2000 Sydney Olympics. Again becoming the youngest Indian to ever play in Olympics. Though he could not secure a spot for himself in the finals of shooting, still he ended up in the 11th position on the table. Seeing his performance, Abhinav Bindra received his first honorary award from the government of India in 2000.

And the following year 2001 came as a breakthrough for his career. Starting with winning his first medal, a bronze at Munich World Cup, leading him to win six more medals the same season. And received his second honorary award. Later in 2002, in the Commonwealth Games he won himself two medals, one gold (Paris event) and one silver (Individual event).

With Abhinav Bindra’s Shooting performance everyone had hoped for him to win a medal at the 2004 Summer Olympics. Though he returned home without a medal but established himself in the International Circuit of shooting by qualifying at position three. Being at the top of his career, he was hit by the biggest vulnerability of a sportsperson of being injured. He hurt his back, and thus was not able to pick up his rifle for another year. All of this hampered his preparations for the 2008 Summer Olympics at Bejing. Where he won his first Olympic Gold Medal in 10m air rifle.

After a huge success at the Olympics, the following year of 2009 did not have any major win for Abhinav Bindra. But the year 2010 came with a lot of achievements. As the 19th Commonwealth Games were being held in his home country India & first athlete from the entire contingent to win an inaugural Gold Medal for the nation along with Gagan Narang. Both of them also shot in unison to set a games record of 1,193 points in the 10-meter air rifle pairs event. Other than this he also won a silver medal in the individual event.

He was also honored to be the flag bearer for the Indian Contingent. Which became the cherry on the top with his performance in the tournament. And took the oath on behalf of all the athletes participating from 71 different countries around the globe. The same year Abhinav went on to win a gold medal again in the 10-meter air rifle in the Asian Shooting Championship.

But again after a couple of successful championships, Bindra was not able to qualify for the 2012 London Olympics. In the 2014 Commonwealth Games, he won a Gold medal, which was his comeback medal after 2012. And that is why maybe CWG has always been lucky and special for Bindra.

Abhinav Bindra and his shooting career marked its end after 2016 at the Rio de Janeiro, Summer Olympics. Where he ended up being in the fourth position. Losing the chance to win his last medal for his passion and career shooting while representing his nation.

Abhinav Bindra has been the shooting star of his nation and is known as ‘The Iceman’. And many young shooters admire and idealize him and his skills. Similar to young cricketers admiring MS Dhoni or young footballers admiring Ronaldo or Messi. All his achievements brought him recognition.

Alongside these recognitions, Abhinav Bindra has also earned awards in the form of cash prizes. With every medal, he won he has also received cash prizes. And as a token of appreciation, various state governments and national governments have also given him cash awards.

Abhinav has always been a person whose life has been surrounded by sports. And when he started with the business he still looked out for sports. He holds a degree in Business from the University of Colorado. Hence, he knew what was like to be a businessman and how to handle things. And became the CEO of Abhinav Futuristics Private Limited.

His company deals with bringing science and technology to the field of sports and healthcare. To date, it has helped over five thousand athletes and medical patients with its rehabilitation centers and around the clock, especially skilled teams.

Other than the business part, Bindra also runs a non-profit organization. It is known as the Abhinav Bindra Foundation, where they train and provide medical facilities for the underprivileged. This foundation is not only about the shooting but various other sports as well. Athletes from this foundation have represented themselves in para-athletics to swimming. All in all this foundation has been involved in developing the status of sports and its player throughout the country.

Keeping personal ventures aside, he has also played an essential role in various different schemes. From the TOP scheme, one of the most important schemes in terms of athlete development and their health. Other than this he has also been a part of IOC and ISSF athlete committees. And his involvement in them has helped young sports players in financial, physical, and mental health terms.

Being a public face, still, Bindra has never been very open about his personal life. He has always been seen sharing his sports memories on the public platform. And with all of this rumors of Abhinav Bindra having a Wife have always aroused. The internet keeps on linking him to different girls from the same field of shooting. But the truth is, Abhinav Bindra does not have a Wife. He is a part of a very small yet beautiful family. With him sharing a very intimate bond with all of them. Especially the kids of his sister.

He is often seen posting a lot of pictures with his niece, her sister’s daughter. And his world revolves around them. There are no details available over his family of four also. And has made people focus on only his sports and not because of some personal life controversies of being linked to girls and calling them Abhinav Bindra’s Wife.

FAQs Regarding Abhinav Bindra and his Life

How did Bindra feel after winning the Olympic Gold?

Well, Bindra is the only individual who has won an Olympic Gold for India. He shares his experience of winning the gold in an interview as “It was the greatest emotion that I had felt. I was very happy as this moment was the biggest thrill of my life, that thrill lasted for two seconds and that’s it. The greatest emotion I felt at that moment was the feeling of relief because, throughout my journey, I have been very obsessive with my goal.
All my eggs were in one basket, certainly not the way I promote to young athletes. It was a huge amount of relief that, what I had set out to do in my life, I was able to achieve that.”

No, wearing glasses does not affect your shooting skills. You may face a bit of difficulty in the beginning but it is all fine afterward. The best example being of Bindra who himself is Myopic and is the only individual to win Olympic Gold for India. And his glasses have never affected him.

How did Bindra recover from his back injury?

When Bindra has hurt his back, it was nearly impossible for him to go back and pursue his lifelong dream. It happened after his 2006 season, where he had an injury caused due to over ligament stretching and was out for almost a year. And after rigorous treatment to be back on the field and shoot he had to make changes in his position just to hold the rifle. That is how he was able to make it to the next 10 years of his career without hurting his back again. He also won his Olympic Gold after this.

Abhinav Bindra has been India’s star and idol for shooting. His skills and hard work have always kept the Indian National Flag high. But apart from all of this he has been the national pride even after his retirement from the international career of shooting. With all of this Abhinav Bindra, the personal circle has remained very intimate, with having no wife and kids. And proves how much love, dedication, and determination he has for this. All these sacrifices including Abhinav Bindra not marrying and having a wife have proved fruitful for him. As well as for the youngsters who admire him and look up to him.