Federer vs Nadal | Roger and Rafael Head to Head – Stats 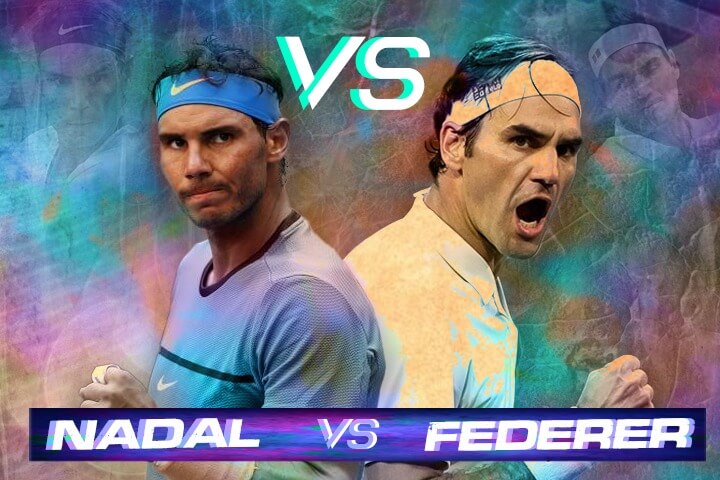 If you follow Tennis, then you’ve definitely heard of Rafael Nadal and Roger Federer. These two tennis legends are regarded as the best tennis players not only of their generation but of all time. Furthermore, they have been at the top of their game, ruling the sport for the longest time. It is only obvious that they have been compared to each other on several occasions. Moreover, in this article, we will do just that, we shall look at a detailed head to head comparison of Roger Federer vs Rafael Nadal. Hopefully, by the end of the article, you can choose your favorite from the two legends of the sport.

Start Of The Nadal And Federer Era

To begin with, Roger Federer was born on 8th August 1981, in Basel, Switzerland. Moreover, he holds South African as well as Swiss citizenship since his mother is South African. During his childhood, Federer served as a ball boy at the Basel tournament in his hometown. As a child, Federer was into a wide range of sports, including badminton as well as basketball. Furthermore, he claims that playing these sports helped in his hand-eye coordination.

Federer’s major accomplishments during the early years of his career came when he won Wimbledon in 1998. Not only did he win the singles but also the doubles category teamed with Olivier Rochus. Furthermore, Federer reached the US Open Junior Finals that same year. Later, in the year 1999 Federer reached the top 100 rankings for the first time as a professional Tennis player. Moreover, his career skyrocketed ever since and he still continues to be a dominating figure in the world of tennis.

The Spaniard Rafael Nadal was born on 3rd June 1986 in a town on the island of Mallorca. His father was a businessman, but his uncles were heavily involved in sports and also played at major levels. Furthermore, it was his uncle who was a tennis coach, that introduced young Nadal to the sport of tennis at the age of three. Then at a young age, 8 Nadal won a U-12 regional championship. Moreover, this was at a time he was also a promising young footballer. However, his uncle Toni Nadal saw promise in the youngster and increased the intensity of his tennis training.

Nadal was made to choose between football and tennis so that his studies wouldn’t get hindered. Later at the age of 14 looking at the promise in the youngster, the Spanish Tennis Federation requested a move to Barcelona. However, his family turned down the offer as they didn’t want his studies to suffer. The Spaniard won his first exhibition match against Grand Slam Winner Pat Cash in 2001 and has been in close competition with Roger Federer since he rose through the ranks.

Additionally, click here to read about the Spanish Tennis Federation.

In conclusion, Roger Federer and Rafael Nadal are truly Legends of the sport in every sense. They have not only been great on their preferred type of courts but also have been dominating all formats and courts of the game. Furthermore, both of them have had numerous records to their name which makes it really hard to choose between the two. However, if we look at the statistics, then Rafael Nadal has more share of the victories against Roger Federer. Still, Federer isn’t too far behind. Additionally, despite the rivalry on court, the pair have the utmost respect for each other on as well as off the court. Furthermore, both the athletes are in extremely good form. So, there’s still a couple more years left in this amazing career-long rivalry between the two.

FAQs Regarding Federer Vs Nadal

During which year did Roger Federer win his first Wimbledon?

Roger Federer won his first Wimbledon during the year 1998, this was one of the achievements that came to him in his early days as a tennis player

During which year did Nadal win against Grand Slam winner Pat Cash?

Rafael Nadal also knows as the King of Clay won against Grand Slam Winner Pat Cash in the year 2001. Furthermore, this was one of the major achievements in his early playing days.

How many Slams Singles Titles have Federer and Nadal won till date?

Swiss Roger Federer and Spaniard (King of Clay) Rafael Nadal have won 20 singles slams titles till date and are the only two players to do so.

How many head to head matches has Nadal won against Federer till date?

Rafael Nadal has won 24 head to head matches against Roger Federer till date out of a total of 40 matches played between the two.