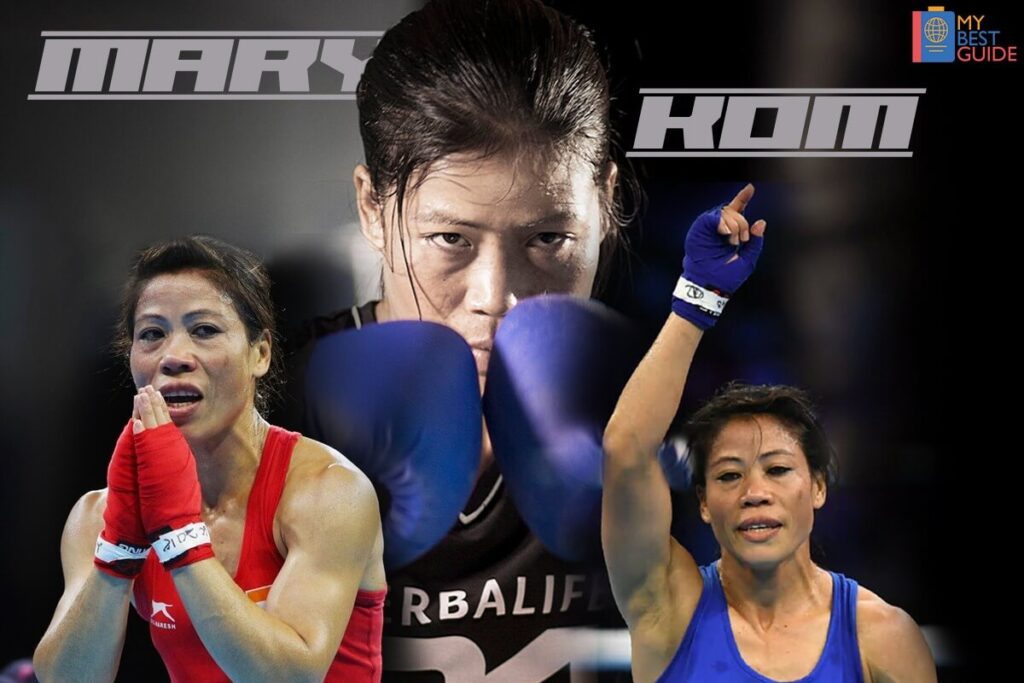 Mangte Chungneijang Mary Kom also known as MC Mary Kom is an Indian Professional boxer. And with all her achievements in her career of boxing, she has also got the nickname of Magnificent Mary. All of Mary Kom Biography is about winning awards and being the first female player or the first player to make many world level records. She is also a member of Rajya Sabha, the upper house of the Indian Parliament along with Akhil Kumar as an observer for boxing. Other than this Mary Kom is the first Indian female to win a gold medal in the Asian Games and her Images vent completely viral after this win. And also became the world number 1 in light-flyweight boxing in the rankings done by AIBA.

Life as a Child

Kom was born on the 1st of March 1983, in a rural district of Manipur. And her family was very poor as they were farmers. Kom lived her life as a child by helping her parents on the farms as well as at home. She was into sports from a very early age and was an athlete in her school days. Her interest in sports came from her father who himself was a wrestler in his younger days.

A few years later, she shifted to Imphal the capital city of Manipur to complete her class 10th. But she failed and did not wish to reappear for exams. And further graduated from college after giving the NIOS exam. Her interest shifted towards boxing only in 2000, at the age of 17 after looking at the success of Dingko Singh. She then started training for boxing but kept it a secret from her own father. Because he believed that boxing would spoil MC Mary Kom’s face and reduce her chances of getting married. As in rural India back in the days getting married was the most important thing in a girl’s life.

Her father later came to know about her love for boxing when Images of Mary Kom were printed in the newspapers. After her win at the State Boxing Championship 2000, which was her first award as a boxer. It took Mary Kom a couple of years to convince her father, but she did and he started supporting her.

The Career of MC Mary Kom

Kom started her journey by going step by step. She reached the International Level in the year 2001 and continued to represent her nation. But after marriage, Mary Kom was not seen in the boxing arena for a long period of time because she was busy being a mother to her Twins born in 20007. She started playing again after she had her first two kids. And has been playing ever since. She has taken time off due to injuries and personal life. But Mary Kom has never disappointed Indians and has made sure the Indian Flag remains high as always by winning medals, trophies, and Awards for India.

Mary Kom also won the National Women Sort Meet in New Delhi 2001 and also won the National Games in the year 2002 held in Hyderabad. All her achievements have become an example for the ladies from the rural part of the nation to come forward and express themselves in different fields to lead a successful life.

She had to travel all alone to Thailand, Bangkok for the qualifiers. Where she lost her wallet along with her passports and other necessary documents. After a selection, she was accompanied by her mother to the London Olympics. Where she became the first Indian woman to win the bronze medal in Boxing. She was also awarded cash prizes as a token of appreciation from the Government of India and her State Government. This is one of the biggest achievements of Mary Kom in her Biography.

The Biography of Mary Kom is filled with Awards and achievements in the Asian Events. Which include the Asian Championship, Asian Games, and the Asian Indoor Games. The first Asian Championship Medal came in Hisar, India. Where she won a gold medal in the Pin weight category.

Further, in the Asian Women’s Championships held across the Asian countries, she kept on winning a Gold medal for her nation for the years 2005, 2010, 2012, and 2017. But in the event held in 2008 in Guwahati, India she had to settle with a Silver Medal when she lost to Jong Ok again in the pin weight category.

MC Mary Kom was also part of the Asian Games both indoor and outdoors. And has made her country proud in both fields. Her first Asian Game medal came in an Indoor tournament held in Hanoi in 2009 where she won a Gold medal again in the category of pin weight. After this, she won a bronze in 2010 and a gold in 2014 in the category of a flyweight.

To date, MC Mary Kom has been in a winning spot eight times. Out of which two spots were for a bronze medal and a silver medal. And the rest of the times she has won 6 World Championships Titles. Starting from the year 2001, where she had to settle with a silver medal at the AIBA Women’s World Championship for the first time held at Scranton, Pennsylvania, United States of America.

Other than this, she has also won the Women’s World Cup once in the year 2004. And a Gold Medal at the Commonwealth Games in 2018 held in Queensland, Australia. Though her category of playing kept on changing with the change in the norms of AIBA. During the starting of her career she played under the Pin Weight category, but after its merger in 2010 where the weight categories were changed. She had to shift to the Fly Weight category.

For the pride that Kom has brought to her nation. Her efforts have been appreciated by the Indian Government and have been awarded various different honors. Other than that, her efforts have also been appreciated by the different International Sports council including the AIBA (The International Boxing Association). Below is a list of all her awards.

With the success that Kom has achieved in her life, she also believes in giving it back in the form of helping anyone she can. She also built her own boxing foundation where she helps the young children to pursue their career as a boxer and also takes care of all their needs of studying, expenses of training kits, and coaches its name is the Mary Kom Foundation.

Read about more such superstars in different sports fields all across the world. From MS Dhoni to Cristiano Ronaldo on our website.

Though Mary Kom had a successful career even before winning the 2012 London Olympics. But after her win she was able to get the mass attraction from a global level because winning an Olympic medal holds a different value in the society. Also, this win was appreciated throughout the country and many state governments and the central government by giving her cash prizes.

What is the stance of Kom on Media and Entertainment Industry?

The inner struggles of Mary Kom’s life were revealed by a Biography movie of hers which starred Priyanka Chopra as Mary Kom. Giving permission to show personal aspects of her life on the big screen says a lot about how she believes this industry can change lives.
But her feature in a documentary film With This Ring also helps to highlight the struggles and life of the Women Indian Boxing team for six years. Both of these performances help us understand her belief in the industry.

How did Kom’s life change after marriage?

Women normally aren’t allowed to play a sport in India, because of society and it’s the norm of how a woman should lead her life. But Mary Kom is a role model for every such woman. She got married to a football player Karung Onkholer. And he understood her life as a sports player. And he is the one who has always supported her to keep on playing even after having kids and having a personal life.