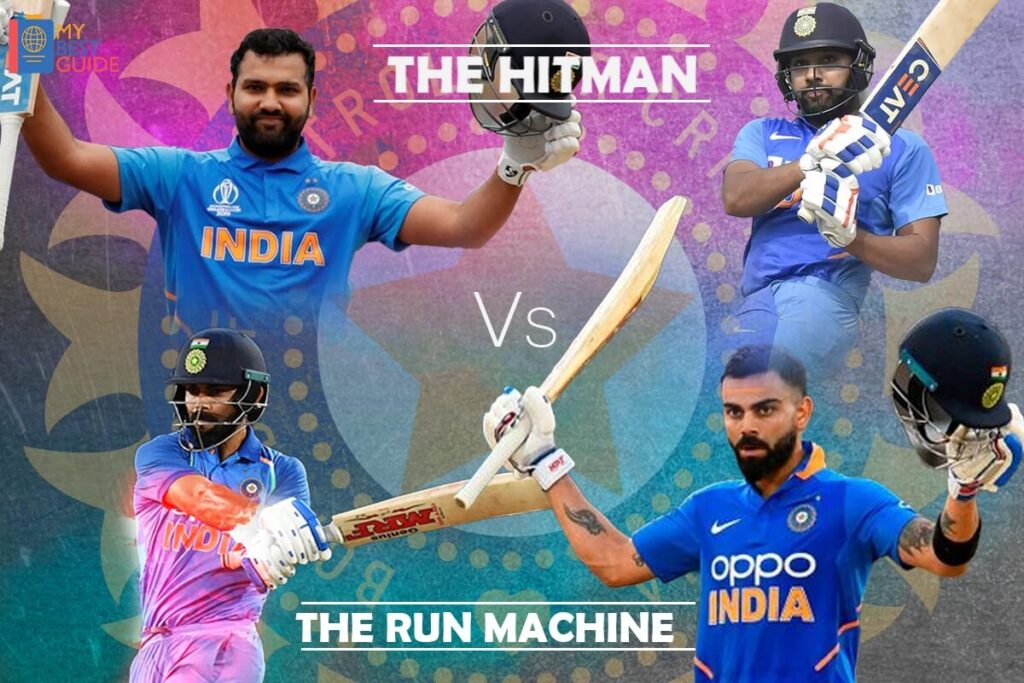 To begin with, India has produced some of the finest cricketing talents in the world. Despite already being home to many of the cricketing legends India continues to produce young phenoms in the sport. Virat Kohli and Rohit Sharma are two such cricketers that have inspired not only Indian cricket fans but also cricket lovers across the globe with their exceptional talent. Additionally, both Rohit and Virat have been compared with the Indian cricket legends as well. Also, It’s obvious that Kohli Vs Rohit is a common and hot topic of discussion, and hence In this article, we shall compare Rohit Sharma Vs Virat Kohli’s stats, records, and achievements and look at both the batsmen in depth.

We shall take a look at the various aspects of comparison of Rohit Sharma vs Virat Kohli’s stats not only in Tests but in ODI’s and T20 formats as well.

Kohli proved his skill and talent way before he was selected in the India U-19 team in 2006. Evidently, he had an outstanding season with the youth team. Furthermore, In 2008 he led the Indian U-19 team to glory at the ICC Cricket World Cup in Malaysia. Virat also managed to score an incredible 235 runs from 6 matches and he had an average of 47 and was the third-highest run-getter in the tournament. In addition, Kohli was 1 of the 3 batsmen to score a century in the tournament and was heavily involved in the semi-final victory against New Zealand.

Shortly after the U-19 World Cup, Royal Challengers Bangalore signed the young prodigy on a youth contract of $30,000. Additionally, consequent to his World cup performance Kohli was awarded the Border-Gavaskar Scholarship in June 2008. As a result, this scholarship allowed Kohli to train in Brisbane at Cricket Australia’s Centre of Excellence for 6 weeks. Subsequently, the Indian national team shortlisted Virat in the 30 men probable squad for the ICC Champions Trophy. However, this was just the start of an incredible journey for the current Indian skipper.

Unlike Virat, Rohit Sharma wasn’t part of a winning squad in the U-19 World Cup of 2006. Consequently, the blues lost to Pakistan in the finals. After that, fortunately for Sharma, the selectors banked on him and drafted him into the Indian T20 squad, and Rohit Sharma didn’t fail to impress in his first international role. Rohit was also included in the probables list for the ICC world cup. However, he didn’t make the final cut. He later assumed the role of the opening batsman as he settled into the star-studded locker room of the Indian Cricket team.

Rohit Sharma made his ODI debut in 2007 and since his debut, he has managed to bag a total of 9,115 runs from 224 matches. Moreover, he has secured 29 ODI centuries in his career. Additionally, he managed to score 3 double centuries in his ODI career and 43 half-centuries to his name. His highest score is 264 and he has an amazing ODI average of 49.27 and also the batsman has hit the ball 244 times straight passed the boundary line. All in all, he ranks 2nd in the ICC ODI rankings.

Virat Kohli first stepped into the Indian ODI squad in 2008 and since then he has 11,792 runs from 245 ODI matches. Unfortunately, he has 0 double centuries as compared to Rohit’s 3 but he has a good 14 ODI centuries more than Rohit Sharma. That’s a total of 43 centuries in ODI’s for Virat and he has hit 57 half-centuries as well as he has a highest score of 183. Additionally, Virat has smashed 121 sixes and has an ODI average of 59.86 and these amazing stats have got Virat the number 1 rank in the ICC ODI rankings.

If we compare the ODI statistics of Rohit Sharma Vs Virat Kohli then both Rohit and Virat have performed exceptionally. However Virat has the upper hand when it comes to the number of centuries, the number of ODI runs, and batting average.

Rohit Sharma’s Test debut was in 2013 and to begin with, he has played 32 Tests and scored a total of 2,141 runs, and out of this, he has bagged 1 double century and 6 centuries. Additionally, he has 10 half-centuries to his name too. Furthermore, Sharma has managed to hit 52 sixes and has a highest Test match score of 212. To sum up, Rohit’s Test match average is 46.54 and he ranks 14th in the ICC Test Match ranking.

Moving on to Virat Kohli he has played a little over twice the number of Tests as Rohit but has scored over three times the number of runs. Additionally, Virat has a total of 7,202 runs to his name and not only does Virat have 27 centuries but also 7 double centuries to his record. Also, Kohli has reached the half-century mark 22 times and his highest test match score is 254. Moreover, he has smashed 22 Test sixes and has an average of 54.98, and consequently, his brilliant form in Tests has ranked him number 1 in ICC Test rankings.

In conclusion, the stats of Rohit Sharma Vs Virat Kohli in Tests speak for itself that Virat is the clear winner and by quite a margin in this category.

Despite the obvious fact that Kohli has more runs in this format as well, Rohit Sharma has put up a pretty good fight. Since his debut in 2007, Rohit Sharma has scored 2,633 runs in 104 matches and he has 19 half-centuries and 4 centuries to his name. Additionally, Sharma has an average of 32.11 and his highest T20 score is 118. Furthermore, He has scored 120 sixes and ranks 13th in the ICC T20 rankings.

On the other hand, Virat Kohli has scored 2,689 runs in just 77 matches since his debut in 2010 and the current Indian captain has 24 half-centuries to his name. In addition, Kohli has an incredible T20 average of 52.73 and his highest T20 score is 94. Moreover, Virat has blasted the ball straight into the stands 74 times and he ranks 9th in the ICC T20 rankings.

After comparing Rohit Vs Virat’s ODI stats, Virat is the winner in this category as well but with a lesser margin.

Both the Indian batsmen have several records and achievements to their merit. To begin with, Rohit Sharma holds the record for the highest individual score in ODI’s (264 runs). and he is the lone player to have 3 double centuries in ODI’s. Furthermore, he is the second Indian after Suresh Raina to secure centuries in all 3 formats of the game. Additionally, he has the highest number of 100s (5) in a single ICC World Cup. Furthermore, Sharma has received the ‘Arjuna Award’ in 2015, and in 2019 he received the Golden Bat award, and very recently this year he received the Rajiv Gandhi Khel Ratna award.

The current Indian skipper Virat Kohli has the highest ICC rating in all three formats compared to any other Indian batsman. He reached the 10,000 and 11,000 runs milestone faster than any other batsman in ODI’s. Moreover, Virat is a 3-time recipient of the ICC player of the year award (2012, 2017, and 2018). Additionally, he has received the Sir Garfield Sobers Trophy twice (2017 and 2018) and in 2018 Virat was the ICC Test Player of the Year. Also, he was a 3-time Wisden Leading Cricketer of the year. Furthermore, he received the Arjuna Award, Padma Shri, and Rajiv Gandhi Khel Ratna in 2013, 2017, and 2018 respectively.

In my opinion, both the players are supremely talented and it shows whenever they take the field. However, statistically, Virat Kohli is the winner in the Rohit Vs Virat debate. There’s no shying away from the fact that while comparing Rohit Vs Virat’s stats Virat Kohli has excellent records and achievements to his name that makes him the winner.

Rohit Sharma, on the other hand, is also a phenomenal contemporary to the skipper and one of Virat’s toughest competitors. To be compared to a player of Virat’s caliber is an achievement itself.

To sum up, apart from statistics both players are outstanding in their own way and play very important roles for the Indian cricket team. Both the batsmen have won the hearts of the nation and have made their stand in the International cricketing world. Additionally, many young and budding cricketers look up to Virat Kohli and Rohit Sharma as their idols. They have already made us proud and hopefully will continue to do so in the coming years.

Click here to read on how to start your journey to succeed in cricket.

Who is the better batsman Virat or Rohit?

After comparing Rohit Vs Virat’s stats it is very clear that despite Rohit Sharma being a tough competitor, Virat Kohli is the clear winner in all 3 formats. However, Rohit is not that far behind the Indian skipper.

Who is the king of Cricket?

The current Indian skipper has been breaking records and surpassing many of the greats and as a result, is regarded as the King of Cricket.

Is Virat better than Sachin Tendulkar?

Sachin and Virat have often been compared on various occasions. However, Sachin is still the rightful holder of many of his records but Virat Kohli is soon catching up and could possibly break them.

Who are the top 3 IPL batsmen?

The Indian hitman Rohit Sharma has a highest score of 118 runs in the T20 format.