OTT Platform Vs Theatres: Which one is the future of Movies? 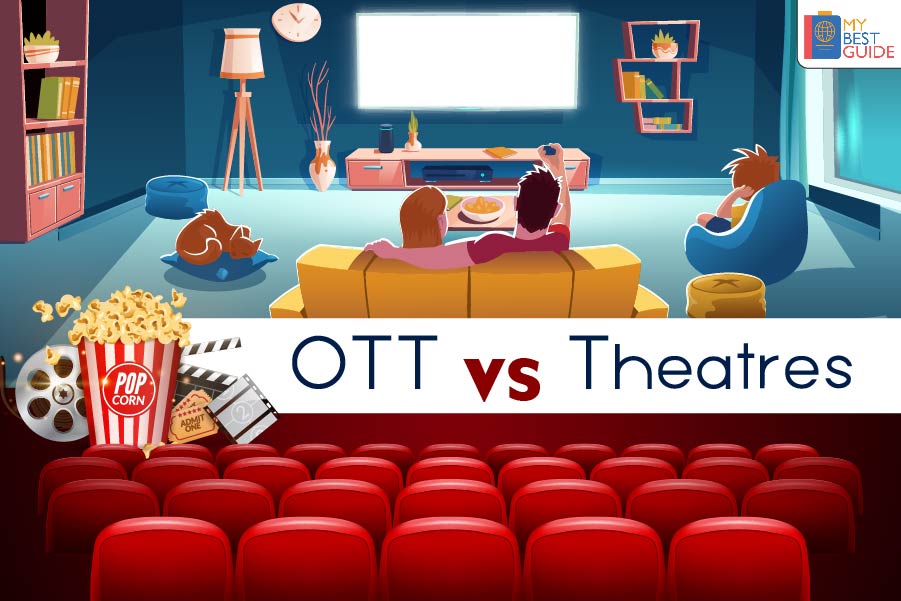 The consumption of movies is facing a constant rise in India. People have enough passion and love for films and more than enough content to watch. Movie theatres have been a great source of entertainment for a long time. And, now with changing times and increase in OTT platforms and streaming apps in India, the competition is getting tough. In this race of providing great content to the viewers, there is a clash between OTT Platform Vs Theatres. Due to the increase in the number of movie watchers, the future of movie streaming apps, OTT Platforms and movie theatres looks very bright.

So, which one is the future of movies between the two and what does the future holds for Movie Theatres, OTT Platforms and Streaming Apps in India? Let us find out who wins this race by comparing the two- OTT Platform Vs Theatres.

What are OTT Platforms and streaming apps?

Over-the-top Platforms and streaming apps is a streaming media service that provides users with a wide variety of multi-media creation. It offers content through broadcast, internet cable and satellite television platforms. With people’s changing lifestyles and increased use of smartphones with affordable internet services, OTT Platforms are getting more popular.

How are OTT Platforms growing in India?

India is one of the fastest-growing nations in the world, be it in any aspect. Indians have limitless love for entertainment and especially movies in their lives. For Indian families, watching movies in theatres equals to a family outing where they can spend time with their families. Now, with the introduction of many new movie streaming apps in India, the future of movies, movie theatres and OTT Platforms is looking much better.

OTT Platforms and Streaming Apps have taken many steps to gain popularity and widen their base in India. Many of the Streaming Apps are setting up their studios to produce more content. An important reason that attracts the viewers and helps the OTT Platforms to grow in India is original content. All the Streaming Apps offer a large variety of original web series and movies in different genres. Many streaming apps also offer shows and movies in local languages. They partner with local production companies and as a result, make their movies and series. Many telecom companies have also introduced their OTT platforms and streaming apps to offer content to the viewers.

The number of Streaming Apps in India has increased from a single digit to double-digit in the past few years. As a result, OTT Platforms are competing with each other as well. Viewers have lots of content to choose from all these apps, but it also leaves them confused as to which one to choose. Here, you can read a comparison between two popular Streaming Apps and know which one is better.

The war between Streaming Apps Vs Movie Theatres has both advantages and disadvantages to it. Watching a movie in a Theatre is a beautiful cinematic experience, whereas OTT Platforms let you have a good time in the comfort of your home. Both of them offer great content and viewer experience. Let’s take a look at how OTT Platforms and Movie Theatres benefit and challenge each other.

Earlier, people used to be eager to watch new movies on the big screen. They still are, but now, they are willing to wait until they are released on or purchased by the OTT Platforms. Many of the popular streaming apps such as Netflix and Amazon Prime are now buying digital rights to the highest-earning films more than ever. Youngsters play a vital role in the success of Streaming Apps. The reason is that they want interesting, engaging and relatable content which OTT Platforms can provide. Here, they can choose to watch anything at any time and anywhere, which is not the case with Movie Theatres.

Now, many of the producers choose to release their small budget films directly on OTT Platforms. Releasing films with a low budget and less familiar names on the big screen is difficult. Also, at times it gets hard to find a release date for a film due to limited cinema screens in India. Thus, to cut the cost of printing and advertising, and avoiding the struggle of release dates, releasing them on Streaming Apps seems better.

Movie Theatres and OTT Platforms, both have their own USPs in the streaming business in India. On the one hand, Movie Theatres offer the opportunity of watching movies in 3D with high sound and picture quality. On the other hand, OTT Platforms have no language barriers. Along with offering content in different languages, Streaming Apps also have the option of subtitles in different languages, including regional ones. OTT Platforms also let you watch personalized content and give recommendations based on what you like to watch.

Movie theatres charge money depending upon the movie, showtime and seating. Whereas, OTT Platforms charge money on the monthly and yearly basis as per the plans providing different content and features. One benefit of the streaming apps is that they offer a variety of content for non-premium subscribers as well. Thus, in terms of price, OTT Platforms are more affordable. Watching movies at home brings more comfort, but it also means more pauses and breaks. Whereas, in a movie theatre you can enjoy your movie without any disturbance.

As a viewer, if you give more importance to the vibe of watching a movie on the big screen and like it old school, you would choose to go to a movie theatre. Whereas, if your comfort is more important, you would like OTT Platforms more. Also, as the earlier parts of some Hollywood movies are present on the OTT Platforms, people become excited about watching the new ones in the theatres. Thus, in many ways, OTT Platforms and Movie Theatres help each other as well, and along with giving competition to each other, they push the viewers who want more content towards each other.

Future of Movie Streaming Apps and OTT Platforms in India

As the current trends look, the OTT Platforms are growing day by day and are here to stay. Television, cable and theatres still hold an important place in Indian homes, but slowly OTT Platforms are starting to dominate them. As per the report by counter search, top 5 metro cities alone account for 55% of the total OTT users. The same report also suggested that youngsters under the age of 35 accounts for 89% of the Indian OTT users. These findings show that the majority of viewers are from the younger generation. But Streaming Apps also have content for other age groups, making them a great option.

As published in The Economic Times, a report by Boston Consulting Group says that Indian OTT Industry can reach a market size of $5 billion by 2023. These findings show that there are more than 30 OTT Platforms currently and a user on an average uses 3-4 at a time. It provides a lot of scope for the OTT Platforms as the number of people who haven’t used a particular app at all is very large. Also, there are millions of people who have never used any OTT Platforms, especially in rural areas. And now with cheaper internet services in rural areas, OTT Platforms can attract a large market share.

The customer base of any OTT Platform largely depends on its subscription charges. Charging a nominal amount helps a streaming app in expanding its customer base. Affordable pricing always attracts more customers. Pricing is one of the main challenges for OTT Platforms in India. One example of this is Netflix. Netflix faced a lot of problems in India initially, due to its high subscription charges. Therefore, for more growth in future, OTT Platforms need regular work on their content and pricing.

Over the years, Movie theatres have gone under a lot of transformation. Over time, multiscreen theatres have increased whereas, single-screen have decreased. Many of the single-screen theatres have closed down due to high operating costs. PVR and INOX have been the two main contestants in the Entertainment Industry for a long time. Both of them dominate the industry and have a large market share. The reason is continuously providing the viewers with something new and exciting. PVR was the first one to open a 4D screen in India in 2016 and INOX introduced automated kiosks which brought a significant change in the industry.

Future of Movie Theatres in India

FAQs Regarding OTT Platform Vs Theatres

How do movies make money on OTT Platforms?

The answer is very straightforward. OTT Platforms buy the digital rights of a movie from its producer to release it, and in return, pay the producer a certain amount. Another way is that many of the OTT Platforms make their movies. The producer gets a fixed amount to make the film, and the amount left after the movie’s budget is the producer’s profit.

How do OTT Platforms affect the Film Industry?

Nowadays, consumers are more content-driven than anything else when it comes to movies and shows. OTT platforms have given a new face to the industry. They provide the viewers with a variety of content and the choice to watch anything any time and anywhere. And this keeps more and more viewers coming to them.

Why is OTT important?

Many reasons make OTT Platforms vital. They are compatible with many devices, including smartphones, desktop and Television. OTT Platforms are also much affordable and are available at low prices than the prices of movie tickets in a theatre. And, lastly, they are very creative and unique.

The COVID-19 pandemic has shown every Industry its worst phase. Some part of the Entertainment Industry has seen a downfall whereas some part a lot of growth and expansion. Movie Theatres have shut down since the last few months due to the pandemic resulting in a loss of thousands of crores of business. On the other hand, OTT Platforms have seen a constant rise in the number of viewers in their already huge customer base. The pandemic has forced the people to stay inside their homes and which in turn has made them turn towards OTT Platforms more. Movie Streaming Apps have seen millions of new subscribers globally which will benefit them even in the future after the pandemic will end. Whereas, movie theatres will have a tough time getting back on track in the future.