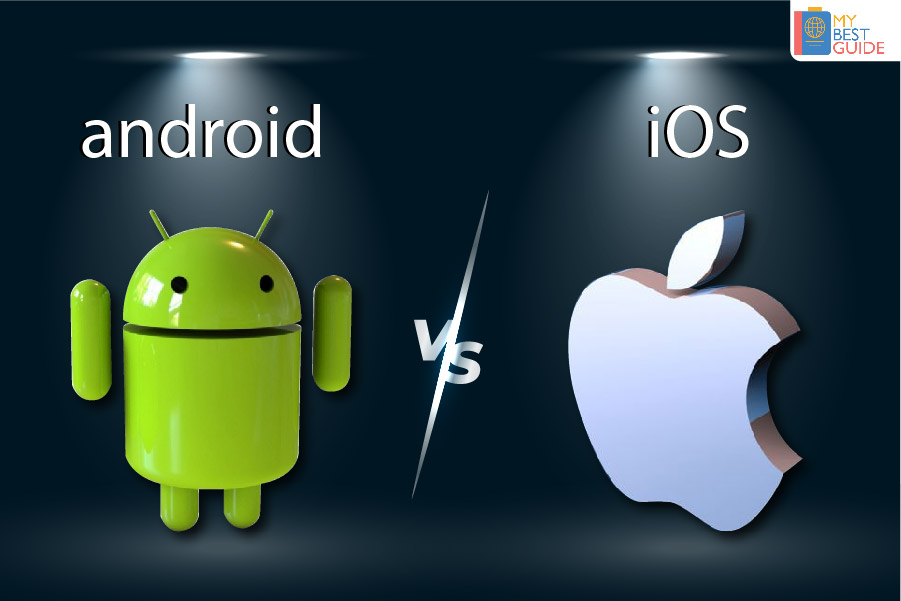 ‘Which Is better when we think about iPhone vs Android?’ Lately, this has been the most frequently asked question. Through the course of this article, we will discuss the differences between them. In addition, we will also fill you in about the battle of Android vs iOS.

Introduction to Android vs. iOS

Before we dive further into this topic, it is of utmost importance to introduce the two operating systems. Android is a mobile operating system that is an updated version of Linux. There are many developers of Android including Open Handset Alliance and Google. The main purpose to develop the operating system was for touchscreen devices like tablets and mobiles. To date, the majority of people from all over the world prefer and use Android.

The other system from Android vs iOS section, on the other hand, is developed by Apple Inc. iOS is mainly developed for the company’s hardware devices like iPhones and iPod Touch. The system powers most of the company’s mobiles. After Android, it is the second most used operating system among the people. These are some of the basic introductory differences between Android and iOS. Further in this article, we will cover other differentiable aspects of iPhone vs Android.

In this section of our Android vs iOS article, we will talk about certain technical differences between the two. All the important development dissimilarities will be covered in the following paragraphs. Now, without any further ado, we will begin with it.

In this section of Android vs iOS comparisons, we will talk about the development environment that is necessary while making the two systems. Before moving further into it, it is essential to know that environments can not be interchanged.
Nowadays, programmers are using Android Studio by Google during the development of Android. It has taken away all the followers and users of the previous environment, Eclipse. Engineers prefer studio because of the possibilities it provides: great debugging, better performance, and simple packaging. When talking about iOS developers, they use XCode. It is the best environment to make applications for devices like iPads and iPhones. With XCode, it becomes easily possible to detect problems in syntax as well as logic. It also helps in fixing the code by overcoming these errors.

When we talk about Android vs iOS, all of us know that Android uses Play Store and an iPhone uses the App Store. So, reviewing Android apps take less time than iOS apps. This happens because Android apps undergo an automatic check whereas the iOS applications need personal experts for reviewing. It approximately takes a week’s time to verify an iOS app. Any Android app can be submitted with some errors. Submission of a single Android application more than once can be done. iOS applications, on the other hand, may face rejection in case of any errors.

The major difference between iPhone and Android is in their development languages.
Beginning with Android, the developers most of the time use Java, which was the initial language. After Java, came C++ with better features and some improvements in comparison to Java. It also gave the developers a better native experience. Later, Kotlin took over C++ and is still in use by the makers of the system as it is compatible with other ones.
On the other hand, the second operating system in section Android vs iOS was using Objective – C since the very beginning. But, after the introduction of Swift, a new programming language, the developers have started using it instead of Objective – C. Swift understands programs much quicker and in a better way than Kotlin does.

Other features for comparison between iOS and Android

Apart from the technical differences between iPhone and Android devices, there are many more features to compare. Both the OS have things in common too. But, the differences outweigh the similarities. Now, we will talk about their performances and may other things. This will be the most essential part if you want to buy a new smartphone.

At first, we would mention some similarities between the two OS. Both of them use a touch interface. This includes swiping, tapping and many more commonalities. They offer a home screen with a status bar on top. This bar includes Wi-Fi, battery percentage, cell signal, etc. Talking about differences, there aren’t many with the interface. Android allows you to have widgets on your screen. These widgets include weather updates, music player, etc. iOS, on the other hand, only has app icons. But. iOS also allows you to pin the frequently used apps in the dock.

Speed of Apps in iOS and Android

To find out which is fast from Android vs iOS, you must carry an experiment. The same set of applications were run on both devices. They were opened one by one. This is how one conducts a speed test by repeating the cycle twice. Once this completes, record the time taken to complete the two cycles. It is always clear that an iPhone takes much lesser time than an Android device. Honestly, this should not be the only test to test the speed. This is because it depends on the publishers and how they develop the same apps for both the OS. There are chances that the internal working of the apps may differ on each platform.

Voice Assistants in the two OS

There is not much difference with the virtual assistants between iPhone and Android. iOS has Siri which is a smart assistant. It replies to what you dictate or what you ask. Siri enables you to do multiple things. It reserves tables for you at restaurants, reads out sports scores, and finds movie timings at a local theatre. With Siri, it is also possible to dictate a text or an email that you want to send to someone. Android has Google Now which provides all the above features. In addition, it also reminds you orally that what is your next task while keeping track of your calendar. This was all about the virtual smart assistants of iPhone vs Android.

Apps supported in Android vs iOS

All of us know that from where do we get apps in both OS. For Android, there is Google Play Store and for iOS, we have the App Store. The Play Store, at this point, has over 6,00,000 apps. The majority of these are for tablets than for mobiles. But there is an upgrade. Many apps like Pinterest, that were initially developed for iOS, are now available for Android. Apple app store has about 7,00,000 applications. Some of these are for iPads. Here, the advantage is that games are first developed for iOS, and then for Android. The essential thing is that the most important apps like Social media and OTT apps are installable in both OS. Talking about OTT platforms, it has always been a confusion to choose between Netflix and Amazon Prime. To make your choice, you should visit this article about the two platforms.

In this section of software upgrades in Android vs iOS, the winner is iOS. Updates in iOS are available for all its devices. There are exceptions to some older versions of iPhones. This certainly happens for devices that are more than three years old. For example, devices older than iPhone 4S don’t have Siri. When talking about Android, Google upgrades Android on a regular basis. Even after this, there are people who don’t receive these updates. Providing updates to the users is completely in the hands of phone manufacturers. Another disadvantage is that newer versions of Android don’t get updates before at least five to six months.

With online mobile payments into consideration, iOS has gained many more users than Android. Both the OS have their own applications for making payments. iOS uses Apple Pay for the same. The app is very easy to use with fingerprint identification. iOS also provides an app called Passbook. This helps to store all your cards and tickets in one place. Android, on the other hand, uses Google Wallet. The Android devices with an NFC can only have access to this app. Google Wallet doesn’t support fingerprint identification like Apple Pay. However, there have been increasing users for both apps.

Both iOS and Android are vulnerable to malware. But, more risk lies to Android devices. This is because Android allows installing outside applications. Basically, Android is more open to various bugs. There have been regular complaints about problems in Android. This is just because people install a lot of applications from outside. On the other hand, this is not that big of a problem with iOS. The OS is inclined towards a better protection and verification of apps. It also wins when it comes to protecting your personal data. It also saves you from unknowingly sharing the apps on your device.

Technically, it is a tie in iPhone vs Android when considering parental control. Both are good on their part. With iOS, the ‘Screen Time’ feature acts as a great benefit for parents. It allows blocking and limiting certain apps and features on your children’s device. This can happen on all Apple devices. All in all, they provide better built-in parental controls. You can also decide on how much time can your child use any application. With Android, it can not do these things. Rather, it does things that are equally important. With an app called Google’s Family Link, you can do a lot of things. For example, you can limit screen time, allow what apps should install on your child’s phone, lock their device, etc. Android, unlike iOS, offers third party controls. Both the OS are good to use for children.

FAQs Regarding Android Vs iOS – Difference & Comparison of Operating System

Which OS has a better camera quality?

When talking about cameras, people often think about megapixels first. But, the major difference in the pictures of iPhone and Android is the clarity. Higher megapixels just allow you to take larger images, not better ones. What matters is the lens used. iPhones use better lenses and as a result produce better images. So, if you are buying a smartphone for clicking pictures, iOS is better than Android.

Which Operating System should I buy if budget is not a problem for me?

If budget is not an issue, then your purpose of buying the smartphone matters the most. If you are buying for photography purposes, then iPhone is preferable. But, if appearance is what you are going for, Android is the one.

Which one out of the two has better video chat options?

iOS and Android, both have their own video chat applications. iOS has Facetime. It operates with 3G cellular data as well as WiFi. The drawback over here is that the app allows video chatting only between two iOS devices. On the other hand, Android has Google Hangouts. Again, even this operates on WiFi and 3G data. The advantage of this app is that you can chat with an iOS user too.

Amidst the ongoing pandemic, people are advised to stay inside their houses. In this crucial time, people must have something to pass their time indoors. This is where gadgets come in. Especially, mobile phones and tablets. With this, the sales of both iOS and Android have increased rapidly. They have just focused on the luxurious lifestyle lately for a better way of living.