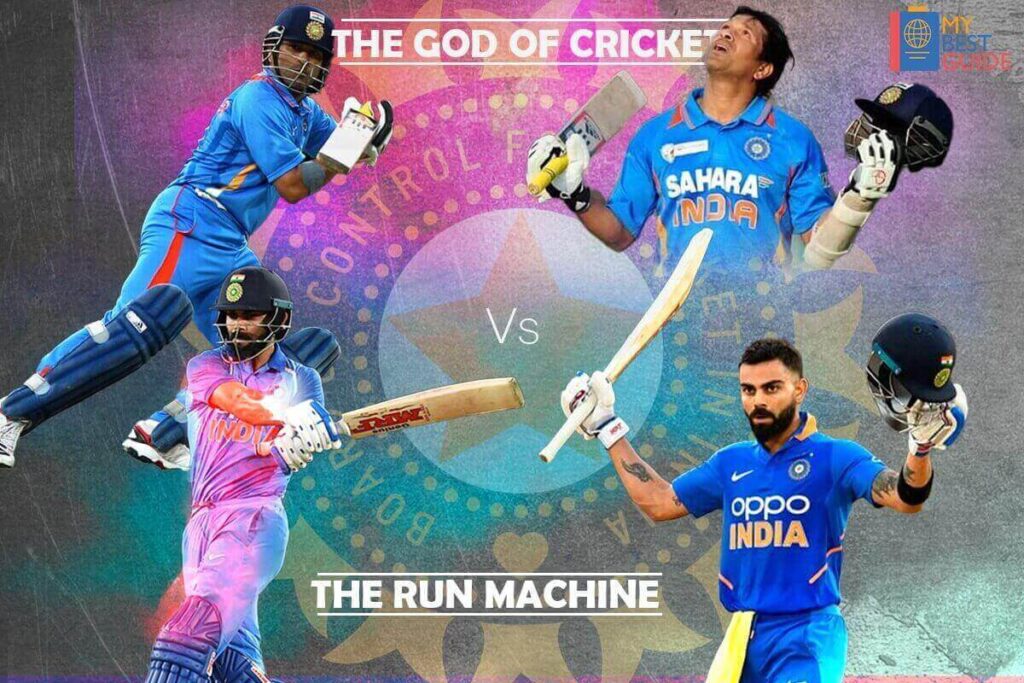 If you follow the sport of cricket, then you have definitely come across the names of Virat Kohli and Sachin Tendulkar. King Kohli and Master Blaster Sachin Tendulkar have been regarded as the greatest batsmen till date to wear the Indian team jersey. Despite Sachin retiring from cricket, he is still compared to many of the talents currently playing for the Indian Blues. Moreover, Sachin is mainly compared to the current Indian skipper Virat Kohli as he is most likely to break the Master Blaster’s records. In this article, we shall dive into the statistics of Virat Kohli vs Sachin Tendulkar and also look at the records they’ve earned to their merit.

To begin with, we shall take a look at how Virat Kohli and Sachin Tendulkar first made their way into the limelight by showcasing their talent.

Kohli showcased his skill and talent way before he was selected in the India U-19 team in 2006. After being called for the youth team he had an outstanding season with them as well. Furthermore, in 2008 he led the Indian U-19 youth team to glory at the ICC CWC in Malaysia. Additionally, Virat managed to get an unbelievable 235 runs from 6 matches and he had a mean of 47 and was the third-highest run-getter within the tournament. Also, Kohli was 1 of the 3 batsmen to score a century in the tournament and was heavily involved in the semi-final victory against New Zealand.

Shortly after the U-19 World Cup, Royal Challengers Bangalore signed the young talent on a $30,000 youth contract. Additionally, due to his outstanding World cup performance, Kohli was awarded the Border-Gavaskar Scholarship in June 2008. As a result, this scholarship allowed Kohli to train in Brisbane at Cricket Australia’s Centre of Excellence for 6 weeks. Later, the Indian national team shortlisted Virat in the 30 men probable squad for the ICC Champions Trophy. However, this was just the start of an incredible journey for King Kohli.

Additionally, click here to read about the governing body of the Indian Cricket Team the BCCI.

Young Sachin was first introduced to the sport of cricket by his brother Ajit. Furthermore, Ajit introduced Sachin to his first mentor Ramakant Achrekar at the famous Shivaji Park in Dadar, Mumbai. At first, Sachin failed to impress, however, his brother requested another trial. This time Ajit requested Achrekar Sir to spectate Sachin behind the cover of a tree, then unobserved, Sachin played much better and was able to impress Ramakant Achrekar. Sachin gained the attention of many people at a very young age for his batting, he also tried his hand at bowling. However, Australian Bowler Dennis Lillee advised him to stick to batting during a training course in Madras held by MRF Pace Foundation.

Moreover, Sachin gained the reputation of a child prodigy at school and all eyes were on him. Furthermore, at the young age of 14, Sachin was selected to represent Mumbai at the Ranji Trophy. During his debut on 11th December 1988, Sachin scored a 100 not out and became the youngest Indian batsman to score a century on debut. Furthermore, Sachin Tendulkar went on to represent the Indian Team at the age of 16 after just a single season playing first-class cricket. Despite being the youngest, Sachin made his mark and his future looked extremely bright.

Sachin Vs Kohli In ODI

Since his debut in 1989 till retirement, Sachin Tendulkar has played 463 ODI matches. Moreover, he has managed to score 18,426 runs, 96 half-centuries, and 49 centuries. He has also managed to score 1 double century in his ODI career. Furthermore, the Master Blaster has smashed 195 sixes and has an average of 44.83 in ODIs. His highest score till date remains at 200 runs.

On the other hand, current Indian skipper Virat Kohli made his ODI debut in 2008. Since then he has played 245 matches and scored a massive 11,792 runs. Unlike his senior, he hasn’t scored any double century yet. However, he has 57 half-centuries and 43 centuries to his name. Furthermore, he has hit 121 sixes and has a high score of 183. Moreover, his ODI average is 59.86. Additionally, Virat Kohli is currently ranked number 1 in this format according to the ICC rankings.

In conclusion, looking at the statistics of Virat Kohli vs Sachin Tendulkar in ODIs, Sachin has set the bar pretty high. However, Sachin has played many more games than Virat so it is yet to be seen if Virat can break the Master Blasters records. Therefore, as of now, Sachin leads according to ODI statistics of Sachin vs Virat.

Virat Vs Sachin In Tests

To begin with, the Master Blaster has played 200 Tests in his career and has managed to score 15,921 runs. Furthermore, he has scored 68 half-centuries and 51 centuries as well as 6 double centuries. Sachin has also hit 69 sixes and has a high score of 248 runs. Additionally, his career average is 53.79.

Contrastingly, Virat has played less than half the number of games Sachin has played. However, he has managed to score 7,202 runs till date. Furthermore, he has 22 half-centuries and 27 centuries to his name. Additionally, his highest score is 254 runs and he has smashed the ball past the boundary 22 times till date. Furthermore, he is ranked number 1 in this format as well.

In conclusion, when it comes to Virat vs Sachin Tests, despite the number of matches advantage Sachin has over Virat, Virat Kohli has come out with some really exceptional numbers. Furthermore, Virat is ranked number 1 as per the ICC Test Rankings. Despite, setting high standards, if Kohli continues his form, he is likely to surpass Sachin.

Sachin Vs Virat In T20I

To begin with, in the T20I format not much comparison can be made as Sachin has played only 1 T20I match in his career. On the other hand, Virat has played 77 matches since his debut in 2010. Furthermore, he has managed to score 2,689 runs, 24 half-centuries, and 74 sixes to date. However, he hasn’t scored any double centuries or centuries yet. Additionally, Virat’s highest T20I score is 94 and he has an average of 52.73. He is also ranked number 9 in the ICC rankings.

To sum up, in this format Virat is the clear winner as Sachin has only played a single T20I match in his entire career. However, that does not take away the fact that he has been dominating the other formats of the sport for the longest time.

To begin with, like Tendulkar, Kohli has also been exceptionally good with the bat. Furthermore, the record for fastest to 19,000 international runs that previously belonged to Sachin was Broken by Virat. Not only did Virat break this record in 2018 but also broke it by a noticeable margin. After that Sachin’s record for fastest to 20,000 international runs shared with Brian Lara was also broken by King Kohli. Additionally, Kohli has also surpassed Sachin for the record of most international 100s while batting second. He has also left the Master Blaster behind in the most number of 100s in a winning cause.

Additionally, click here to read about 5 records of Sachin Tendulkar that Virat Kohli may never break

How many Test double centuries has Virat scored as compared to Sachin?

Virat has not yet scored more Test centuries than Sachin Tendulkar, however, he has managed to score 7 double centuries as compared to Sachin who has scored only 6 in his career.

Who is the best Indian batsman till date?

Sachin Tendulkar has been widely regarded as India’s finest batsman, however Virat Kohli is the current talk of the town and is most likely to go down as the greatest Indian batsman.

How many ODI runs has Sachin Tendulkar scored in his career?

The master Blaster has scored an enormous 18,426 runs in his ODI career and has also managed to score a double century which is extremely commendable.

How many Test centuries and double centuries has Virat scored since his debut?

To sum up, across all three formats of the sport, Virat Kohli and Sachin Tendulkar have been extremely phenomenal. Furthermore, it hard to decide a clear winner considering that Virat has barely played half the number of matches as compared to the Master Blaster Sachin. Only time will tell if Kohli can manage to break through all of Sachin’s records. However, Sachin is already regarded as a legend of the sport and has done his bit for the nation. Also, Virat Kohli is following similar lines to Sachin and definitely is an extremely talented individual. Moreover, if Virat Kohli continues his superb form, he will definitely meet all the expectations the nation holds against his name.